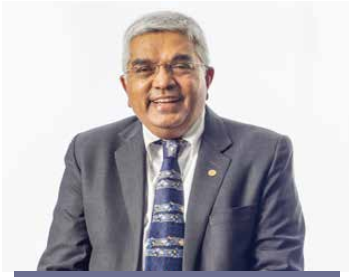 
—Jaishankar CMD, Brigade.
Download Profile
ARCHIVE INDEX
"A few thoughts…" is a column that our CMD Mr M.R. Jaishankar writes regularly for our house journal Brigade Insight. A few of his columns are reproduced here."
April 2009

The last 7-8 months have been the most challenging in this millennium. Economies the world over have been badly affected. Relatively speaking, India is less affected than the western economies and countries whose GDP is exportdependent. Indian exports comprise less than 20% of our GDP, as compared to 40% in the case of China and about 60% in the case of East Asian economies like Japan. Though, by and large, India is perceived as less dynamic and aggressive during the boom time, in the present circumstances, the country would be classified as conservative, wise and not greedy. Probably, the same rationale is applicable to Brigade Group also.

When will the economy recover to its previous glory? In my opinion, not in the immediate future, although one can say with reasonable confidence that the worst is behind us. There are several predictions that in 6–18 months, there will be a marked improvement in the world economy. A lot will depend on the US, which is the world’s largest economy, with its GDP 14 times bigger than India and with less than 30% of the population of our country.

The response by the developed countries to the global recession has been swift and substantial, which has helped in preventing the ‘recession’ from becoming a ‘depression’. Other than reduction of interest rates by 2-3%, the Indian government hasn’t taken many positive steps, as compared to say China, which is pumping in USD 250 billion+ to stimulate their economy. The biggest impetus to the Indian economy seems to come from unexpected quarters—parliamentary elections! An estimated Rs 10-15,000 crores is likely to be spent before 31 May. One shudders to think what kind of a fractured coalition of parties will come to govern us soon. We should all pray for a stable and progressive government at the centre.

As regards interest rates, since the inflation has been brought to under 1%, there seems to be tremendous scope and opportunity to bring it down further—at least by 2%. Interest rates should always be a function of inflation rate and GDP growth rate.

The welcome news is that Swiss banks and banks in other tax havens are willing to announce the names of the account holders. If the billions of dollars stashed away by corrupt businessmen, officials and politicians comes back to our country, it will be the biggest stimulus package we would receive to revive the economy.

Negative sentiments are on the downward mode, as can be gauged by the 50% jump in stock sensex in the last 2 months. But one can never be sure whether it is due to technical reasons and manipulations by the operators, or due to improved fundamentals of the companies. Even the real estate business has shown good signs of recovery from March onwards, though it is one of the last sectors to recover since the decision to acquire a property can always be postponed. But, a smart investor will treat the current situation as an opportunity to pickup good properties at reasonable rates. For those who missed the bus in 2002-04, this is the right time to buy.

As for NRIs, they cannot ask for more. It is a golden opportunity, what with the rupee depreciating by 25% in value against dollar (compared to January ‘08) and property prices having come down between 15-25%, depending on projects. Fence sitters are bound to regret it, if they don’t act now.

Brigade Group achieved a major milestone on 4 April ’09, with the opening of its 4-star serviced residences, with the internationally reputed Accor Group managing the co-branded property: Mercure Homestead. The positive feedback on the quality of rooms, F & B, and facilities like gym, spa and swimming pool is heartwarming.

June ‘09 will also see the opening of a second school—The Brigade International School—by Brigade Group’s not-for-profit trust, the Brigade Foundation. It is a boon for the residents of Whitefield and surrounding areas to get quality education with great infrastructure and convenience at a reasonable fee structure.

Team Brigade is making all efforts to quickly complete our flagship projects—Brigade Metropolis, Whitefield Road and Brigade Gateway, Malleswaram-Rajajinagar—which are in an advanced stage of execution. So also Brigade Courtyard in HMT Township, Brigade Palmsprings in J.P. Nagar, and Brigade Solitaire and Brigade Citadel in Mysore. I thank all our customers for showing their confidence, patience and support.