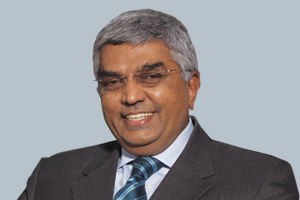 "Celebrating the 150th Birth Anniversary of Mahatma Gandhi - the Father of our Nation is a great way to recall the principles of this noble man, in this chaotic and materialistic world, especially to Millennials & Generations X - Z. I wonder what may have been the status of our country if the Mahatma had not succeeded in securing independence through his non-violence movement. India as a country did not exist before 1947. It was just a collection of hundreds of princely states within a geographical region. What a daunting task it must have been for Gandhi & his band of leaders to bring all the diverse, multicultural states under one umbrella. What is noteworthy is that our country is growing from strength to strength on its journey (to become the 3rd largest economy in the world) by trying to overcome the economic & political challenges one can expect with an over 1.2 billion population. We have a visionary leader in Prime Minister Narendra Modi and he needs all the good wishes to steer the country towards the right path, to eliminate poverty and to give the vast population of India a decent quality of life.

Diwali, the Festival of Lights, is indeed a festival to celebrate the victory of Good over Evil. This is aptly demonstrated by the elimination of the ISIS leader, thanks to the relentless American efforts. What a contrast between a violent leader and a leader who is an epitome of non-violence!

After Prime Minister Narendra Modi’s resounding election victory, one expected the growth of the Indian economy to go northwards at a faster rate. Unfortunately, that is not the case. It appears that the laws of economics are stronger than the wishes of the population. To me, it seems like a cyclical slowdown affecting the economy, and it appears like a 10-year business cycle. Our country did witness economic slowdown / recession, particularly for the real estate sector, during the years 1988-1991, 1998-2001, 2008-2011 and now. The current recessionary cycle for real estate started quite early in 2016-2017 due to DeMo, the introduction of RERA & GST. The slowdown has taken a huge toll with few large and most one-time, small-medium sized developers exiting the real estate sector. The complexity of doing business has vastly increased due to regulatory changes and challenges. It is seriously, not for the weak-hearted.

Thankfully Brigade, with its diverse portfolio, but more importantly due to following its core corporate values, is managing not only to survive but also to grow. Recessionary & slowdown times create a lot of opportunities for the wise and people with money. This is the time for smart people to make investments but after a proper study of the pros & cons. There are many good real estate projects worthy of investment in our portfolio. While preparing to launch new projects in Chennai & Hyderabad, our focus has been to complete many ongoing commercial & residential projects, apart from launching the next phase of large projects in Bengaluru.

I am delighted to mention that the Indian Music Experience was formally launched with an outstanding music event by Padma Bhushan Ustad Zakir Hussain on the 27th of July 2019. I am elated with the continued appreciation for the concept & content of IME by all those who have visited the museum. It has encouraged the team to work harder and innovate more.

I am also very happy to have signed an MoU with the reputed St. John’s Hospital to set up a ‘Not for Profit’ Health Centre to start with, and a Hospital subsequently for the benefit of the neighbourhood at our large residential project - Brigade Meadows, in Bengaluru South.

Download Profile
CONTACT HIS OFFICE
Call         +91-80-40467666
Email     chairman@brigadegroup.com
ARCHIVE INDEX
"A few thoughts…" is a column that our CMD Mr M.R. Jaishankar writes regularly for our house journal Brigade Insight. A few of his columns are reproduced here."
August 2011

How things dramatically change in a very short time! The three very significant developments in the last few weeks are:

S&P downgrading Credit Rating of United States from AAA to AA+ and the resultant turmoil in world financial markets;

All were avoidable and self-inflicted; due to complacency, arrogance and politics. But all the developments have shaken the world / country / establishment. It would take quite a while for normalcy to set in.

India was on the path of recovery from the recessionary conditions of 2008-2010, till inflation within the country and multiple scams involving thousands of crores were unearthed. Naturally, an anti-corruption movement is required to cleanse the system, at least to some extent. While corruption is a worldwide problem and existing probably from the time civilization started, it has reached mind boggling and dangerous proportions in our country, which is bound to destroy us if not tackled now. I hope and pray a positive outcome will emerge from the spontaneous, tremendous and voluntary support the Anna Hazare movement has received.

From the beginning of 2011, the mood in the real estate sector was one of optimism, which was expected to turn to bullishness. Unfortunately, due to the macro economic factors plaguing the world, cautiousness has set in. High interest rates have not helped the mood at all. I hope and wish there will not be any worsening of global factors and ratings. Due to the inherent strength of the Indian economy and latent unsatisfied demand of the past 3-4 years, pessimism is unlikely to set in.

Tourism is one industry which can have a far reaching positive impact on any economy and will help in generating employment in the unorganised sector for the uneducated class. Statistics of just Singapore and Hong Kong make startling revelations. Singapore, with its 5 million population (size less than Bangalore), attracts 12.5 million tourists (2.5 times its population). Hong Kong, with its 7 million population, attracts 36 million tourists (5 times its population). Whereas, India, with 1.2 billion population, gets only 5 million tourists, i.e., a dismal 0.05%. China gets 56 million tourists and earns USD 185 billion a year (about the same as the entire annual export earnings of India). India has the potential to earn at least USD 100 billion (if not more) in a year, provided proper strategic actions are taken by the Central and State Governments to improve infrastructure and tourist friendliness. India has many, many more tourist sites than China.

I am delighted to mention that Brigade has received 3 important awards in the last 4 months:

‘Economic Times’, in association with ‘Great Places to Work Institute’, rated Brigade Group as the 2nd best company to work for in the Real Estate Sector, and also as 88 among all companies in the country.

‘Construction World’ rated us amongst the Top 10 Builders in the country for the 5th consecutive time, in a perception survey in which developers, financial institutions, architects and vendors, across the country participated.

The festival season has started. I hope it brings cheer to the Indian economy and joy to its citizens.

Having entered our 25th year of operations, after a lot of internal deliberations, I am happy to release the organisation’s Shared Vision and Mission statements and Core Values. This should stand in good stead for the decade ahead and give Brigadiers a clear sense of direction, enabling them to work with a unified sense of purpose and to achieve set goals and objectives. Every Brigadier has to remember and constantly remind oneself of Brigade Group’s core values and ensure these shared values are not compromised in any way.

Sheraton Bangalore Hotel at Brigade Gateway, which had its soft opening in mid-March, has received very encouraging feedback from guests and industry professionals. This well-appointed 230-room, 5-star deluxe hotel with six F&B outlets and a 1000-seater banquet hall, is bound to be amongst the best hotels in Bangalore, and will be the pre-eminent Sheraton Hotel in the country. General Manager Martin Wuethrich from Switzerland and Executive Chef Gustavo Maurelli from Italy will bring their international expertise to lead Sheraton Bangalore in the path of success.

It is a fantastic achievement by the Indian Cricket Team to have won the ODI World Cup, after a gap of 28 years. It is very difficult to live up to expectations, having been the favourites to win the Cup. The credit undoubtedly goes to the players for their outstanding teamwork, superb leadership of Captain Dhoni and Coach Kirsten, and performing when it mattered most in the knock-out stage. Many analogies can be drawn to the corporate world from the strategies adopted in winning the Cup.

India’s 2011 provisional census figures, indicating a population of 1.2 billion+, is certainly a cause for worry, and not celebration. Speedy urbanisation is a matter of great concern to city planners. Meeting the infrastructural needs of the growing population will be a huge, daunting task. Our planners have to work overtime to ensure that demand for space and services are met, if one has to stop proliferation of slums in urban centres. There is a great need to decentralise growth by ensuring development of each and every district and taluk centre.

The Karnataka State and Central budgets for 2011 have been passed. Unfortunately, policies and tax rates are being tinkered with frequently, leading to confusion and a loss of direction to the business community. Real Estate hardly finds favour with the tax authorities. A few examples: in Karnataka, stamp duty rates on Joint Development Agreements have been increased by an unbelievable proportion and the VAT applicability principle in the construction industry has changed to compound the confusion. In the Centre, tax exemption to SEZ units is withdrawn by imposing MAT; Service Tax is imposed for hospitality business … the list goes on and on.

Anna Hazare’s anti-corruption campaign was much needed and, hopefully, will serve as an eye opener to the government and corrupt people. The spontaneous response to Anna’s fast from all sections of society was most encouraging and heartwarming. High corruption in society is what is coming in the way of India’s planned and sustained growth, and stopping the country moving from good to great. If people’s simmering discontent about corruption in every sphere of life is to be avoided, fast and inclusive development across the country is the only answer. Otherwise, Egypt’s Tahrir Square kind of situation is not far off in our country. If one determined Narendra Modi and one determined Nitish Kumar can make so much of a difference in Gujarat and Bihar, imagine what a small battalion of such people could do to the growth of India. By showing honesty and progress, if Nitish Kumar can get 80%+ seats in the Assembly (highest ever by any party in any state in the country since elections came to be held), why don’t other politicians realise good development will ensure re-election and continuance in power?
Let us hope for the best!